Tuberculosis has over the years been connected with Witchcraft, Vampirism and other folklore stories over the years
Post Reply
1 post • Page 1 of 1
Message
Author

Before the Industrial Revolution, tuberculosis may sometimes have been regarded as vampirism. When one member of a family died from it, the other members that were infected would lose their health slowly. People believed that this was caused by the original victim draining the life from the other family members.

Furthermore, people who had TB exhibited symptoms similar to what people considered to be vampire traits. People with TB often have symptoms such as red, swollen eyes (which also creates a sensitivity to bright light), pale skin and coughing blood, suggesting the idea that the only way for the afflicted to replenish this loss of blood was by sucking blood.

Another folk belief attributed it to being forced, nightly, to attend fairy revels, so that the victim wasted away owing to lack of rest; this belief was most common when a strong connection was seen between the fairies and the dead. Similarly, but less commonly, it was attributed to the victims being "hagridden"—being transformed into horses by witches (hags) to travel to their nightly meetings, again resulting in a lack of rest.


TB was romanticized in the nineteenth century. How victorian women saw tuberculosis.
Many at the time believed TB produced feelings of euphoria referred to as "Spes phthisica" or "hope of the consumptive". It was believed that TB sufferers who were artists had bursts of creativity as the disease progressed. It was also believed that TB sufferers acquired a final burst of energy just before they died which made women more beautiful and men more creative. 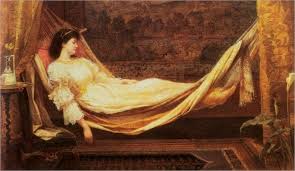 Return to “Folklore, Vampires and TB”